Come and hear a recap of the GGJ event and experience, and brief post-mortems from the IGDATC GGJ teams. Then, play and rate some of the 2300 games to help find the gems.

Bring laptops, smartphones, ipads (and a PS3 or 360 controller if you’ve used it with a laptop before.) We’ll also have a selection of the board games ready to play in the cafeteria. 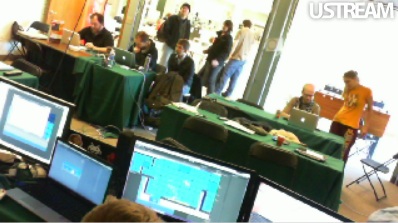 Last shot from the webcast

Here are the games that were made during the 2012 Global Game Jam by IGDATC members.  Thanks once again to the Nerdery for being great and flexible hosts!

More details will be added to this page. For the moment, link will direct you to the Global Game Jam hosting page for the game entry.

Around The World in 80 mbs

I worked on a platformer that originally was suppose to be you running around the world. When you died you would become a random animal. Instead this just it a straight up platformer and it feels like a solid platformer and I’m proud of that.

Back to the End

This game plays in an endless scrolling left and right world and has a hardcore player playing a 2D platformer, and a casual player networked viewing the other players status updates from their game. Then they can interact with them using a facebook-like interface.

Players must navigate a series of puzzles revolving around collecting minions in order to serve your will and solve your puzzles. As players collect more minions, they start each level with them, and eventually loop around to the beginning, allowing them to experience the same easier levels with a vastly increased supply of minions. The game can be replayed infinitely, or at least until the player has too many minions to be handled by their system memory.

Move your “king” pieces around the gameboard attempting to land on and “eat” your own “pawn” pieces. When you have only one piece remaining, you win the game!

How to Make Snake Burgers

Use the left and right arrow keys (or a and d) to navigate the unexpected perils of your home.

Or A Large Bore Hose

One player drives using the keyboard. Another player aims and shoots with the mouse. The last player controls the shielding system with a joystick or controller.

March through an outpost destroying enemies and buildings alike to reach the enemy generator.

Rebuild yourself if too many attacks get by your shield, you can find the bits that got blown off nearby and patch them back on.

Ouro vs the World

Protoboros is a game of serpentine dogfighting. Bite the tail of your enemy.

You go faster with your mouth closed. You must bite tails from behind.

Yggy shoots seeds into mudmen changing them into vegetation. It takes 3 hits to turn a mudman. Mudmen can also attack Yggy. A level is over when vegetation has reached 100%. (We weren’t able to get in the health drops, mudmen becoming vegetation, full vegetation ending, or screen transitions to new levels. But they were intended! 😀 )